A successfully adapted edition of the Harmony Geneva Marathon for Unicef 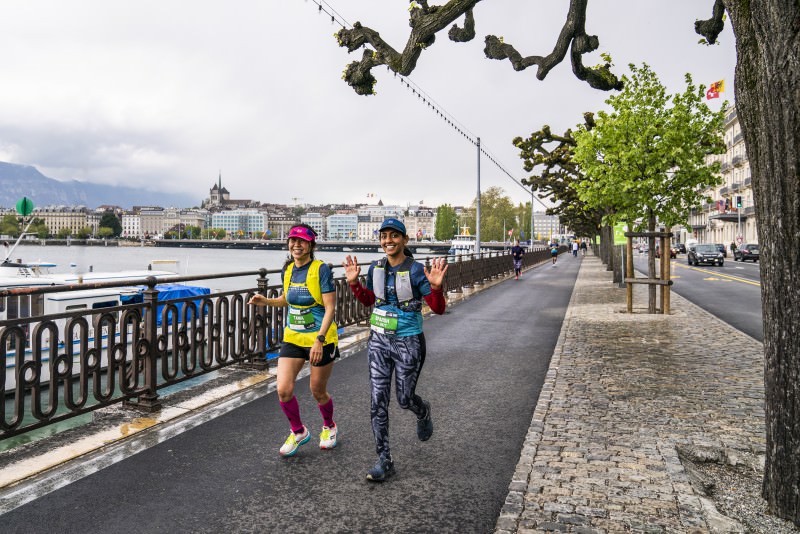 A successfully adapted edition of the Harmony Geneva Marathon for Unicef

The organisers of the event delighted both the hearts and legs of runners and walkers by offering individual challenges throughout the month of May.

An adapted format that has proved its worth

Starting from the Jardin Anglais, thousands of runners and walkers took to the waterfront of Geneva individually throughout the month of May. The most popular formats were the half-marathon and the 10km Race with more than 2000 participants respectively. The main distance was also well attended by running enthusiasts with more than 570 participants. Amongst those who took on individual challenges, the Swiss Patrick Mayoraz was the fastest to complete the main distance in 2h35’21 set. The 10km Walking and Nordic Walking formats also attracted big attention as well as the 5km #LikeAGirl by Always format was a great success for both women and men for whom this distance was also open this year.

A big highlight of the event was the accessibility with more than 426 time slots offered during the month of May giving participants a great deal of flexibility to choose the ideal day and time for their challenge.

Axelle Nesme Jacolino, member of Léman Running, finished the half marathon in 2h01’32. ”I participated in my first half marathon; I had never run so much before. When I saw that there was an event in Geneva, I thought it was a great challenge to start the season. The organisation was top notch and given the circumstances, it would be difficult to do better. Hats off to the volunteers and the organisation who put on this event.”

This new challenge, which was open from May 1st to 30th, allowed many athletes to challenge themselves several times in a row, over one or several desired distances. Among the enthusiasts, Daniel Freis achieved the incredible feat of running the marathon distance four times in four consecutive days from May 27th to 30th to close this edition in style. “I like to run marathon series and the opportunity to do one in Geneva was too good. With this new challenge, my score is 189 marathons completed. My goal is to reach 200. I would like to thank the organisation for allowing me to carry out this challenge, which will remain a very beautiful memory.”

Others, like Jasper McDowell, ran the full range of distances during the month. The Lazy Boys Track Club runner ran the marathon distance four times, the half marathon twice, the 10km Run twice and La Genevoise 5km #LikeAGirl by Always twice. With his multiple attempts he finished on the podium at 3rd place in the marathon and at 1st place in the 5km distance.

To provide the best experience for runners, special event equipment was installed and removed every day by the organisation, and the participants received numerous gifts, including a magnificent Compressport technical T-shirt, a medal for each participant and an overall ranking and by gender.

Faithful to its tradition of an event that is open to all, in addition to the popular challenges, an elite race was held on Sunday 2 May, with around 20 international athletes taking to a closed course which was specially designed. The male and female champions of the queen distance broke the records for both the event and the marathon time on Swiss territory. The organising committee of the event is proud to have been able to welcome and offer this race to these athletes who are cruelly lacking in events due to the pandemic.

The event ended in style this weekend. Franck Romanet, participant in the half-marathon was delighted: “I was very satisfied with my time under a glorious sun, in a magnificent setting with the Jet d’Eau as a motivation. All this thanks to the incredible organisation, which once again showed its talent as an organiser without leaving anything out, the Swissmade in a sporting event is top. Thank you and see you next year.”

From the bottom of their hearts, the organisers would like to thank all the stakeholders involved in the organisation of this adapted edition and look forward to seeing you on 14 and 15 May 2022 for the next edition. A waiting list is open for all runners who wish to receive priority information.

A word from the authorities

”I congratulate the organisers for having imagined this extraordinary edition in order to continue to bring their race to life, and I also congratulate the participants”, underlines Marie Barbey-Chappuis, the administrative councilor of the City of Geneva in charge of the Department of Sports Safety. “I hope that we will find the atmosphere of the peloton in 2022”.

The State Councillor for the Department of Social Cohesion, Thierry Apothéloz, also commented on the success of the event: “On behalf of the State Council, I would like to congratulate all the participants in this event, which was adapted to the health crisis we are experiencing. Congratulations also to the organisers and volunteers. I am looking forward to the 2022 edition, which we hope will be as normal as possible. “

A word from the Event Director

Benjamin Chandelier, Event Director, expressed his satisfaction: “A magical edition took place this year. Despite the particular health context, we were able to admire the joy on the faces of our participants and, to top it all off, we were able to take part in the event ourselves as members of the organisation. I would like to congratulate all the participants for their achievements. I would like to thank, on behalf of the Organising Committee, all the volunteers mobilised for the event, the authorities and the competent administrations of the Canton and the City of Geneva for their precious help as well as our faithful partners for their support.”

Generali Switzerland, the new Main Partner for the Geneva Marathon

After an intense month of challenges, we are coming to the end of this 2021 edition. You can register now for the 2022 waiting list.