The price change is just around the corner. Register before December, 14th, 11:59PM to benefit from advantageous prices! Register now 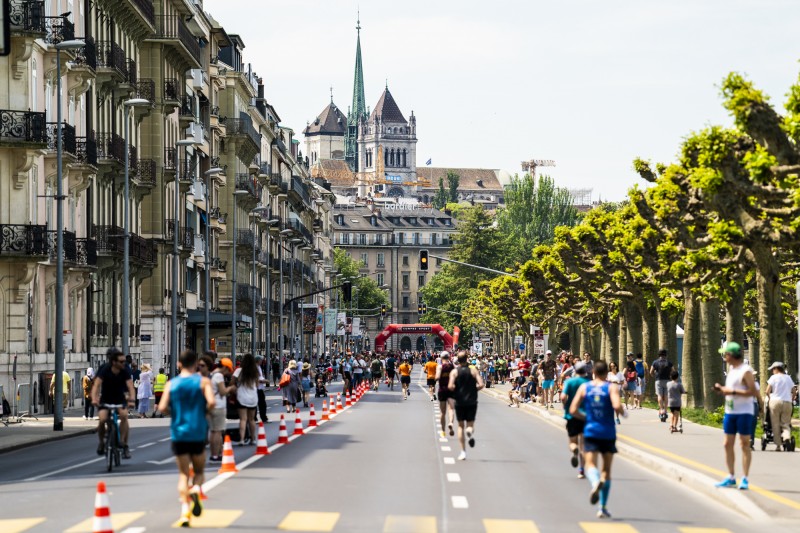 It was a weekend exactly as we like and that we have sorely missed that just came to a close at the Generali Genève Marathon.

What a joy to have found again this vibrancy with more than 15’000 participants, lots of smiles and also tears of joy… A real cocktail of emotions. After two years of ups and downs, this return to normalcy awaited by runners, walkers, elites, volunteers, partners, authorities and organisers was all the more delicious.

From the youngest to the oldest, from the most experienced to the most athletic, with or without disabilities, everyone (re)found the pleasure of taking part in one of the 8 race formats offered.

A weekend of celebration under the sun

From Friday to Sunday, the event village was alive with the many participants and their companions who came to pick up their numbers, enjoy the entertainment and the restaurant area.

The juniors opened the ball on Saturday afternoon. More than 1,900 young champions set foot on Geneva soil, some for their first ever race. More and more numerous each year, the children are getting a taste for running and this from the age of 3, accompanied by a parent for the youngest.

At the end of the day on Saturday, the 5 km by Always, which is now open to mixed gender, delighted more than 900 participants who ran along the quays and back on an ultra-fast course. Inaugurating this distance, it was the Polish Bartosz KWIECINSKI who won in 15’38. “I tried to push myself as much as possible during the second part. It was a super fast race, I loved it”, exclaimed the winner after his race. In the women’s race, Charlene DELHORME (FR) set a time of 18’00. The Frenchwoman looked back on her victory: “It’s the first time I’ve run this distance. I have been working on my mental health lately and that helped me a lot.”

Later in the evening, the 4313 participants of the 10 km Run, Walk and Nordic Walk formats took off from Chêne-Bourg to reach the Gustave-Ador quay. The runners crossed the finish line under the last light of the day while the walkers finished in the moonlight.

The 10km race was won by THSN Refugee Team member Abdi SALAM ALI (SOM) in 30’16. The neck and neck race was very close until the end before the Somali sprinted the last few metres. “This is the first time I’m participating in this event. I didn’t know the course but it was great. I will come back next year to beat my own record.

Rebekah THOMAS (GRB) from England held on to a group of men, which allowed her to hold her pace until the end and win the event in 38’36. “There were so many people to support me all along the course, it was great.”

The day after this beautiful first day, the kick-off for the longer distances was given from Chêne-Bourg. The Half Wheelchair Runners started first followed by the half marathoners.

The all inclusive events ended with the start of the flagship race; the Marathon distance to be run alone or in relay. This idyllic course between town and country made everyone happy. The Half Marathon also drew praise: “I do this course every year and it is absolutely magnificent. For me it is one of the most beautiful Half Marathons in Switzerland” exclaimed Clarisse JECKELMANN, third of the Half Marathon.

It was Swiss Paralympic star Marcel HUG who crossed the finish line of the Half Marathon Wheelchair race first, breaking the record for this distance (43m 37s). “The atmosphere was great. It was a pleasure to compete today”, said the Swiss champion. German Merle MENJE also broke the women’s record in 51m 19s.

Within the Half Marathon Wheelchair field was a prestigious procession of athletes recognized on the international scene such as Marcel HUG (CH), multi-medalist at the Paralympic Games, Alexandra HELBLING (CH) European champion in 400m, Patricia EACHUS (CH), 4th at the London Paralympic Games on the marathon distance, Julien CASOLI (FRA), world champion of the 10km road race in 2010.

THSN trio on the Half Marathon podium

In the half marathon, the battle was very close between the three compatriots of the THSN Refugee Team; Dominic LOBALU, Tadesse ABRAHAM and Kidane SOLOMON. The trio stayed tight until the 9th km before Dominic upped the pace to lead the way. Dominic, who has been in very good shape lately, won the race and broke the Half Marathon record (1h 01m 39s) previously held by Tadesse ABRAHAM from Geneva.

On the queen distance, it is the Tanzanian Emmanuel GISAMODA who snatches the victory on his first marathon in 2h 10m 39s. From the 15th km, Emmanuel took the lead of the pack and pushed on with a big acceleration in the last part of the race allowing him to cross the finish line a little less than a minute before the second runner. This is his second victory in Geneva, after his first place in the Balexert 20 km of Geneva last November.

One step ahead for the big winner of the marathon

The women’s victory went to Meseret DINKE from Ethiopia who won the marathon in 2h 26m 22s. After dropping the women’s pack at the 20th km, Meseret started the second half of the race completely alone with a two minute lead over the second place finisher.

A luxurious gift for the last marathoners

In order to salute the achievement of the participants of the queen distance, the organising committee reserved an exceptional surprise for the last finishers of the Marathon distance. Indeed, a Maurice Lacroix watch was offered to the last man and woman. A double reward for these happy finishers who were also entitled to the mythical hurdle of honour at the finish.

A word from the director

Benjamin Chandelier, Director of the event, said “What a pleasure it was to be able to (re)experience this wonderful festival of running. It is with joy and pride that we close this 16th edition, which broke new records. We are also proud to have been able to collect more than 18’500 CHF in donations for our charity partner, The Human Safety Net Switzerland, for this first edition with them. On behalf of the organising committee, I would like to thank our Title Partner Generali and all our partners who support us. A big thank you also to the authorities and administrations of the City, the Canton of Geneva as well as the 12 other towns crossed for their support. And finally, a huge thank you to all our volunteers for their precious help and without whom the event could not take place.”

See you on 6th and 7th May 2023 to celebrate together the 17th edition of the Generali Genève Marathon. A waiting list is already open for 2023 in order to receive the information in advance: here.

What a wonderful edition 2023. We hope you had a great time. If you too are looking forward to doing it again, join the waiting list today to be…